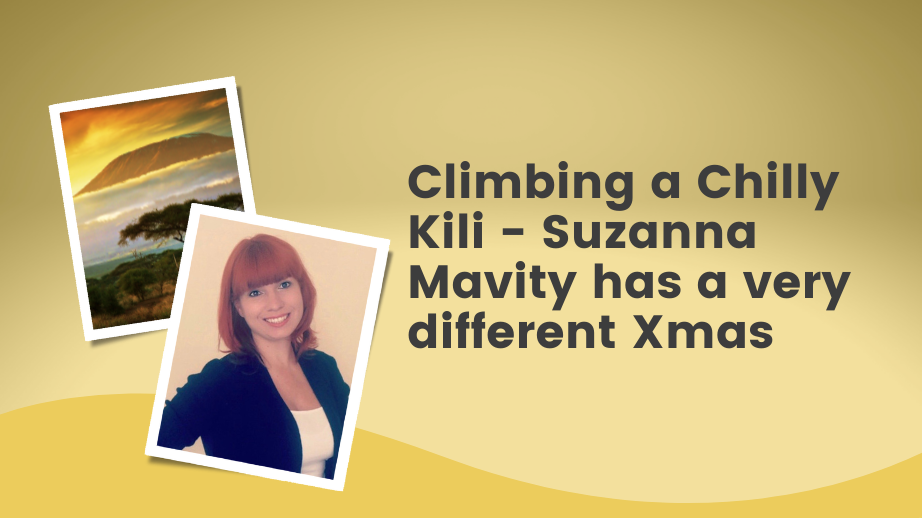 When Suzanna said that we should set the bar a little higher for the latest 'Do It For Dom' fundraiser, I immediately thought her Xmas timing meant she was talking about doing the top shelf challenge or something my particular skills were attuned to.  Sixteen seconds into her explanation of what she was planning I went all Whale's Den and 'I'm out' echoed loudly to every next thing she said.

To climb Kilimanjaro, the base camp challenge considered by most to be harder than Everest - 'I'm out'
To do it in Christmas week, midwinter - 'I'm out'
To do this all in the midst of the latest Covid outbreak with not a 5 star hotel in sight, flying Ethiopian Airways to get there - 'Ok I'm out out !'

But for anyone whose witnessed Suzanna being told 'Its last orders' you'll know that this is a woman not for turning. So to add to all the hardships listed above she then added one of the hardest that she was determined to do this solo. I've been on record more times than I can remember saying she's utterly crazy, if I'm still allowed to say that in these more wokey times.

So whilst most of us were enjoying turkey & Xmas pud Suzanna was braving the elements climbing the 5895 metres and 62km over the course of 6 nights and 7 days, unable to get dry even in the sleeping bag and tent and with winds made walking a nightmare,  even having to contest with altitude sickness a truly debilitating condition that can often take down the fittest of climbers.

However even after all this and twisting her ankle meaning she needed to hobble back down with the aid of walking sticks she still managed to do it. More impressive than all of these setbacks was what she set out to do in the first place. Suzanna had thought she might be able to raise £2-3k but my sole part in this was to say that for what she was doing and with the amount of people i knew would want to back her that she needed to go for a big goal.  Setting £10k she smashed through that and its still going with so many from the industry be they agent or supplier jumping to support. For a fundraising idea that only started 3 years ago to have now raised over £200k says a huge amount over how generous this industry is year in year out but also not just talking the talk having people who like Suzanna are willing to walk the walk.

To put the size of the challenge into context I spoke to Peter Knight, a man known to have undertaken some of the harshest challenges out there and who had done Kili himself. He told me "Without question, Kilimanjaro is the hardest challenge i've undertaken across India look like a gentle outing, Congratulations Suzanna, I'm full of admiration."

Suzanna of course has been a mainstay of the PropTech industry for the best part of 15 years now recognised by most as  one of the best sales people in her time at Brief Your Market, Reapit and now Acaboom, her work achievements enough to win her a sponsorship contract with Wetherspoons.
Do It For Dom was a charity setup to help our friend Dominic Subbiani who was diagnosed with Huntingtons a (and please excuse the vernacular) proper twat of a disease, degenerative and inherited with a 50% chance of handing it down to your child. Just think about that for a second, what that must feel like and then I'd ask you to give whatever you can spare at this time of year, because its not without hope, whilst its true its a terminal diagnosis at the moment there have been signs of a breakthrough in this area.  As the famous supermarket saying goes 'every little helps'. Click here to donate

Do It For Dom will be back this year for our latest fundraiser, now we've got this out of her system I'm hopeful my idea for entering a team into the World Morris Dancing competition will get the attention it deserves. If anyone wants to get in contact either to take part in our challenges or to support them please drop us a line.

Thanks and hope you all have a fantastic 2022.