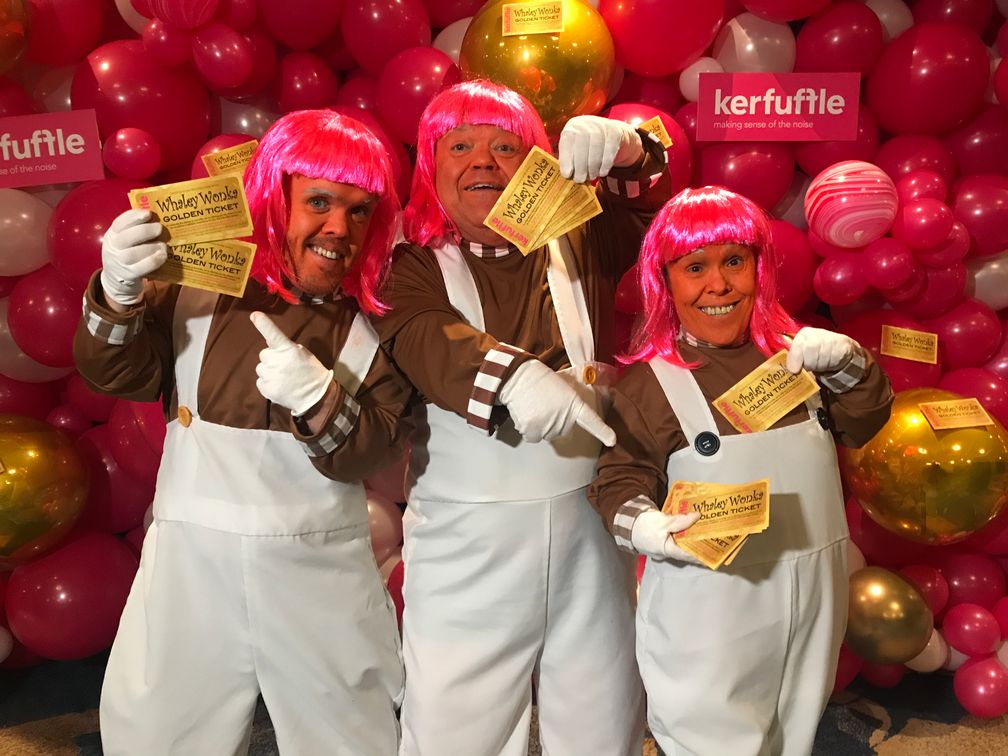 Its time to unveil the winner of the Whaley Wonka (so important you get this bit right) golden ticket.

Most people who attended the launch of kerfuffle at the ESTA's were speechless that I'd actually gone full Whale and hired 'real' Oompa Loompa's 'I DIDN'T THINK YOU WERE SERIOUS!' a refrain I've heard most of my life was echoed around the Grosvenor Hotel. But just as important that day were the golden tickets that were being handed out with the promise of a decent prize, where I attempted to do my best Gene Wilder impression rather than my consistent brilliant portrayal of Augustus Gloop.

Normally at this time agents roll their eyes and react with completely feigned shock and surprise as a supplier has miraculously chosen their biggest prospect as their competition winner. To be fair maybe that's it, Karma so pissed off with Countrywide mysteriously winning prize draw after prize draw decided to talk to the God of Share Prices and dish out a bit of hurt. Well to show that kerfuffle holds itself to the highest standards and once someone had explained to me how to even do a fair draw, even the Untouchables incorruptible Eliot Ness couldn't have made it any fairer.

So I was surprised as anyone to see that a Mr Tom Whale won the prize! Especially as he's not even an agent or had even entered. Calm yourselves, of course this wasn't the case and once I had overwhelmed my childhood urge to go full Simpsons Moe Szyslak and announce a 'Mr I P Freely' or 'Mike Krotch' I did the draw properly.

It is with tremendous pleasure that I can announce Joe Parry of Archer & Co as the winner. I offered Joe two amazing prize options to choose from:

1.      The ultimate cookery experience for any food lover - a fun-filled day with the multi-Michelin-starred chef Jean-Christophe Novelli in his own home followed by an overnight stay at a local 5* hotel. Or

2.      The opportunity to go full Biggles - fly a Tiger Moth at Duxford Airfield wearing the nostalgic costume which includes a leather flying jacket, goggles and helmet for an extra special touch.

He said he’d have a think and let me know. Then, the loveliest thing happened. Joe rang me straight back and said “I've had a think and I'd like to donate the prize to the Do It For Dom auction.”

It takes a lot, aka its never happened but I was speechless with the generosity. “That's absolutely amazing Joe , thank you, that you'd be good enough to give over a grands worth to charity like that'

Simon - 'You are an absolute star'

Simon - 'No I wouldn't hear of it, what an amazing thing to do.'

As I hung up on a gradually more desperate pleading chattering sound at the end of the phone it yet again made me think that this was one of the main reasons I wanted to stay in this fantastic industry after selling Reapit. There are so many people working away on their own charitable endeavors not as I so often do to get the chance to wear something outrageous but simply because its to help their own communities or in this case industry.

Joe, like Dom Subbiani our client and friend who we started the charity for, is a key and involved member of Fine & Country. So whilst I'm gob smacked in many ways I really shouldn't be because the willingness to fight for each other when the chips are down is outstanding. And, in the spirit of reciprocity, I'll be matching Joe's donation at the DIFD dinner and auction on the 4th of September.

A massive hats off to Joe once again!

Now back to my intensive training for this 31 miles of river.