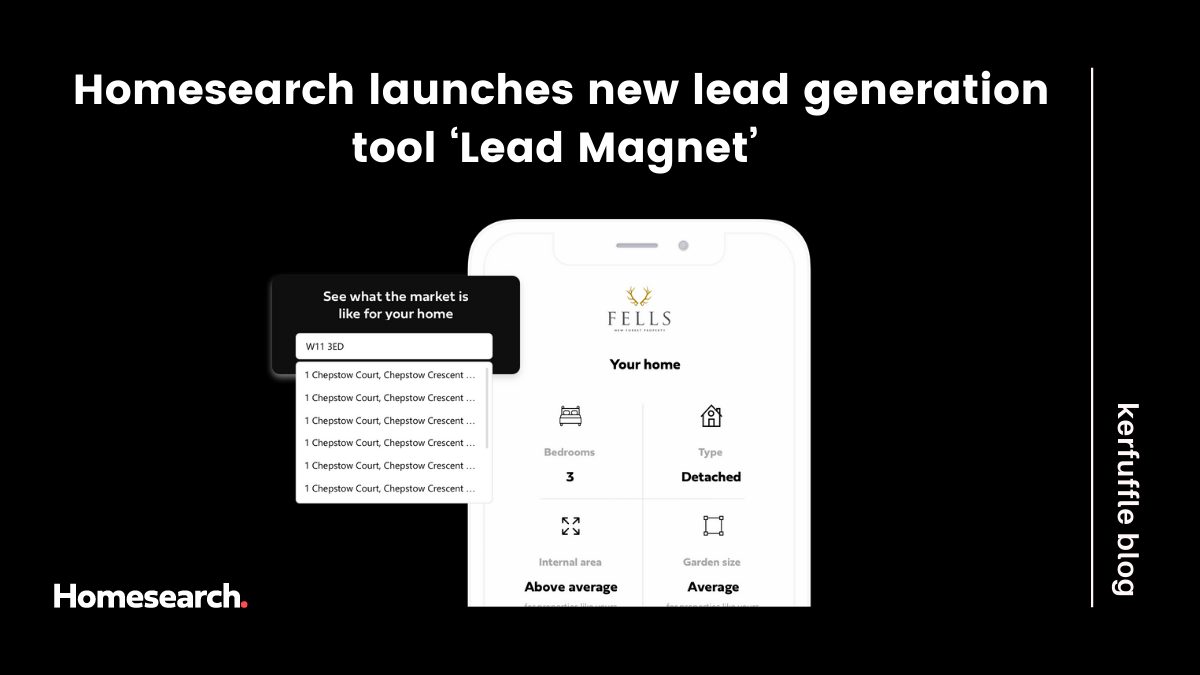 We’re excited to announce the launch of a new lead generation tool from our partners Homesearch. What’s more, they’re giving free access to it for the next 12 months regardless of whether you are an existing Homesearch customer or not and it’s ready to go from today!

What is Lead Magnet?

It’s a lead generation plug-in but with a difference – it’s a much softer sell. The consumer only has to part with their address to access valuation information on their own property, and they’re then invited to contact the agent should they want to take things further. The agent doesn’t lose out as they’re still alerted to the fact that someone at a specific address has performed a search to find out how much their property is worth, and the agent can then follow that up however they want.

So, the tool is all about information, rather than valuation – at least that’s how it’s presented to the consumer anyway. The information which is all branded as the agent includes data on their own home, recent comparable property data and a breakdown of the current market for homes just like theirs. They are then prompted to contact the agent from there if they want to take things further. The agent is then served that address creating an opportunity to search their existing CRM data to find out if it’s someone they know about already, or to target with a direct mail.

Homesearch COO Sam Hunter, describes it as “a totally ‘frictionless” experience for the consumer, who only has to enter their address to view the local market information, rather than provide their name, contact number, email address and answer specific questions about the property, which is the case with many other lead generation tools currently.

Commenting on the launch of this new feature, Sam continued, “One of the features we’ve always wanted to use our data for is online lead generation. When we did our research before building the Lead Magnet, we learnt that the biggest issue facing agents was the quality of leads.  Fake names and emails were always received because the public just wanted to see the carrot being dangled, not talk to an agent. We want to make sure we send qualified leads.

“This takes the intelligent use of data, lead generation and frictionless engagement with the consumer to the next level. As an industry, I think we’re all aware that consumers really don’t want to give up their personal data when they might just be curious. Likewise, agents are understandably protective of the very valuable consumer data that they generate and the majority don’t want to give that data away or share it with a third party.  These two fundamentals drove the design and functionality of our new Lead Magnet tool, which we believe really will move the dial in terms of creating engagement for agents in a way that helps to build consumer trust in their brand from their first interaction. That’s a win-win for everyone.”

Kerfuffle was given a sneak preview of Lead Magnet. Here is what Chief Kerfuffler Simon Whale had to say about it: “I think it ticks the box in terms of being hyper-local and highlighting that key information clearly and concisely. It’s a real evolution from the other tools available. Many people are very savvy at spotting a lead generation tool, but with this one it feels much more relaxed and consumers won’t feel like they’re being processed.”

David Mintz, co-presenter of the Kerfuffle Podcast and director of Manchester-based agents Normie & Co was also very supportive of the new release and commented “This tool is fantastic. With instant valuation tools you often feel like you’re having to give too much away in order to get your figure. Not only is this tool a lot more generalised, but it also gives people an indication of how the market is around them, and where they sit in their local market opposed to just laser pointing their house, and that is what most people are curious about.”

Agents can implement their own Lead Magnet tool at https://homesearch.co.uk/lead-magnet. For more information, hit 'I'm interested on this page.